Flowers in Bloom,Grass looks greener and the moods get better everyday during spring and summer..One of my passions is Gardening..love to grow things and take care of them..

My love for Roses is something to be noticed..Hybrid teas,knockouts are proudly showing off their beauty in my garden.. 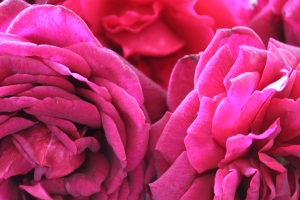 My peonies are the best show off of all..blooms are heavenly..

Potted plants and me..they are with me throughout the year..as i have mentioned before in one of my posts about house plants..i have jasmines, lemon tree(since we live in a zone where it cannot be left outside throughout the year) plaintain plant..and some herbs seasonally.. 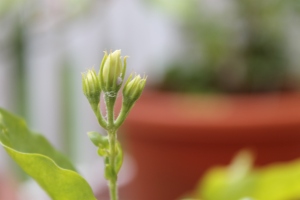 Hostas, Azaleas and Magnolia are showing off in front side of my house 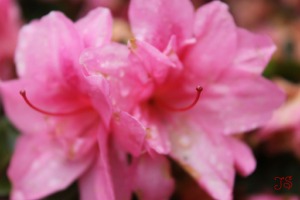 I have more tips than you can expect on Gardening..planting and taking care..One key ingredient is Epsom Salt..you heard me right!! They give life to almost all blooming and non blooming plants..

This is a mini post like my coat / caddy holder project(it is mouthful).. I bought this coat hanger from AC Moore (my third home from my home :))..painted with green apple from glidden(home depot) and of course white..

Found this little adorable tin baskets at dollar section of the Target,love the ribbon on them, now it houses  my paint brushes(not all of them,need to organize it better) and some touch up markers and couple of scissors..again needs a little touch up..but i’m pretty happy with the end result:)

Hope you liked this idea as much as i do:)

Thanks for the read:)

Hello, hope you had a good weekend, for this week’s project,i’m tackling my faux leather black ottoman, when it was on sale at tar-jay, i grabbed it several years ago..since then it has seen its best and not so good days..

We mainly use it to store our munchkins toys..and some throws..i’m NO sew person, i have a brother sewing machine ,but i haven’t even touched, but i have a fantastic sewing project..that is for later..now back to ottoman…Bought a Pretty Shower Curtain of course from Tar-Jay 🙂 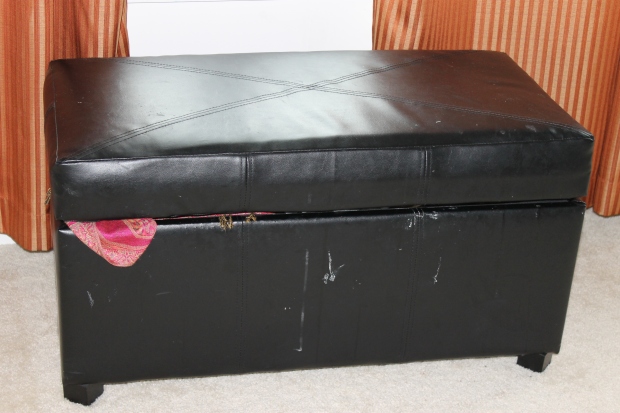 Guessing, cutting and trying the pieces on the ottoman to have an idea

Bad lighting, took this pic in the night after my little munchkin when to bed..

I didn’t even bother about the bottom half,since they are nicely tucked in and on top of it a heavy cozy pillow to keep them in place, now for the upper part of it

Took the velcro strip with the sticky back  and kind of stick it alongwith some mod podge to make sure they are in place to wooden part of the ottoman and to the fabric..it was little tricky but i tried my best

and then came the thumbtucks to the rescue 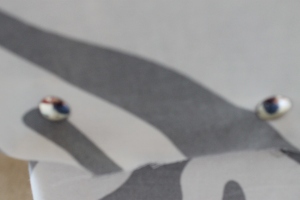 Here is my No Sew Shower Curtain Ottoman Slipcover 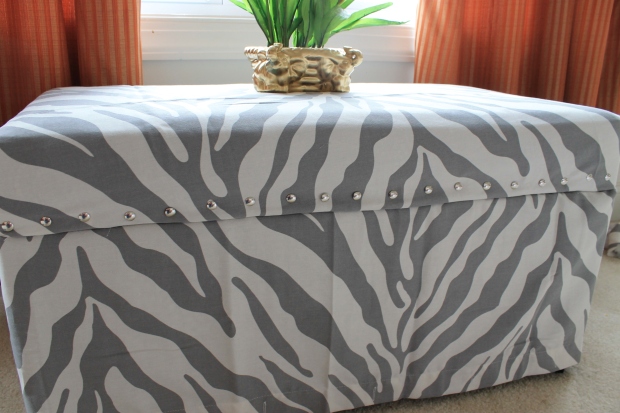 Hope you have a better story than mine..love to hear your thoughts on this..

The title of this post says it all, couple of months back i bought this bamboo rug from Pier1, love the texture but not so crazy about the blah look and my little munchkin likes to stain almost everything in my house 🙂 so stencil to the rescue..i thought not to spray paint it..

here is the Before pic of my Blah Rug

Thanks to my Martha Stewart Stencils and my trusted Pro Art acrylics .. It came out Good:) 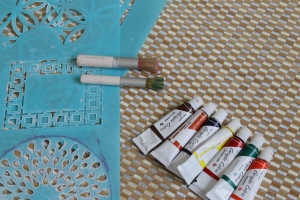 I did the border first 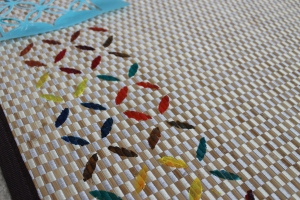 I see paint blotches here and there, that is the reason i stick with the quote “Done is better than perfect” 🙂

Do you have your own stencil story..

©myprettycanvas. Unauthorized use and/or duplication of this material without express and written permission from this blog’s author and/or owner is strictly prohibited. Excerpts and links may be used, provided that full and clear credit is given to myprettycanvas with appropriate and specific direction to the original content.
Loading Comments...